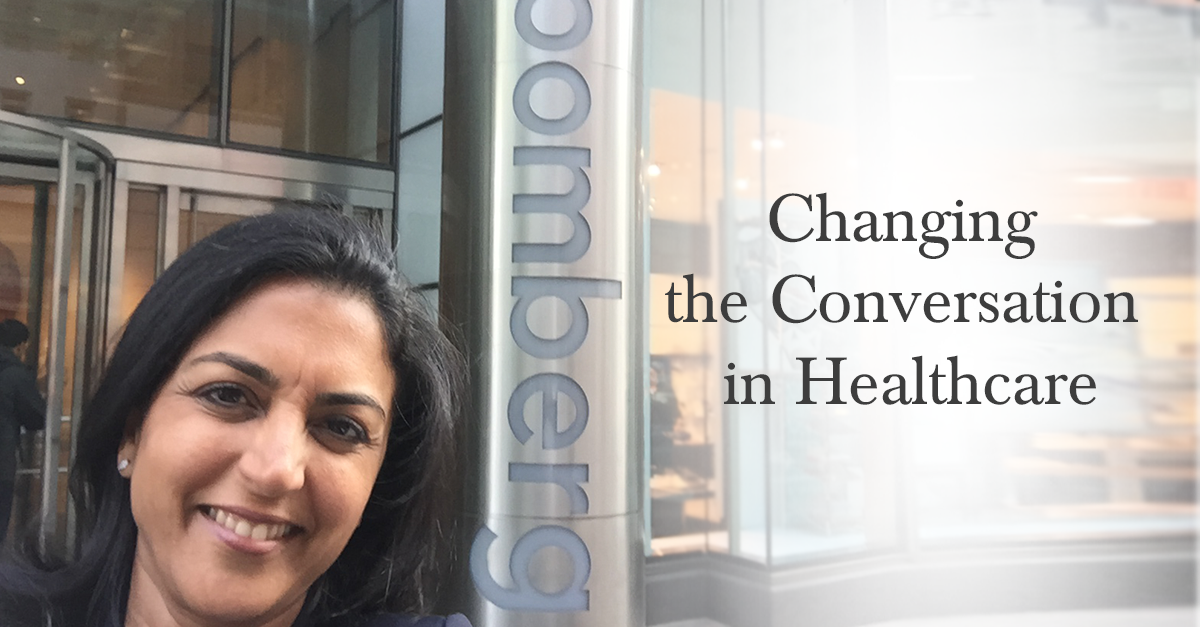 Cory: Welcome, Doctor Neha Sangwan. She’s got an interesting book called Talk RX with a focus on sort of a new approach to healthcare for companies and individuals. I’m glad to have you on, glad to have you in our New York Studio.

Doctor Neha: So glad to be here, Cory and Carol.

Cory: Talk to us about your book and what problem you’re trying to solve here.

Doctor Neha: Well, as a clinician for more than 10 years, I started to realize that people were coming in for a physical ailment—a heart attack or stroke or pneumonia—I was a hospital physician at the time and I would help them through a crisis and then two years later I’d see them back again for another heart attack, another stroke, some other ailment. I started to get the idea that I was actually just bridging them through a crisis. I wasn’t helping them solve the root of their problem.

Research shows that 90 to 95 percent of disease is caused or exacerbated by stress—we all know that. We hear this all the time: “Oh, I’m so stressed out.” My question became, “What’s at the root of that stress? What’s actually making them ill that, when I help them through this, they show up here again?”

Carol: So this requires having a conversation with your patients. I’m not gravitating toward doctors that don’t have the time to have a conversation with me. It’s hard in this world where there isn’t a lot of time off in between patients and doctors.

Doctor Neha: And technology. Doctors, by nature we like stability and we like to stay the course. We start somewhere, and we’re known to retire there. The change in technology brought in a big stress for us. As we started to [implement new technology] the patients started to say, “Hey, we have less time with you and you’re looking at your computer screen, you’re not paying attention to me.” So it was a double whammy. I spend quite a bit of time with Kaiser on the West Coast and talking to other insurance companies about how to get doctors to focus on their patients and be present and use the computers. The funny thing that they said? “We don’t have time for that.” I [told them], “Your presence and your awareness doesn’t require more time; it just requires that you’re actually engaged.”

Carol: It’s productive time. If you don’t give it on the front end, you’re going to spend a lot of time on the back end cleaning up.

Cory: Interesting. Are you able to quantify that stuff? Do places like Kaiser need that or are they more forward thinking? [Do they need] the quantification of X amount of time spent on the front end that leads to Y amount of time that it relieves on the back end.

Doctor Neha: I’ve done a lot of work with them. I have re-quantified the changes in their metrics.For example, I’ve taken on their entire operating room team and their emergency department teams and shown how morale increases efficiency, increases turnover, and time in operating rooms decreases.There are 50+ things that need to happen by 22 departments to turn an operating room over in under 30 minutes. When you invest in teaching teams about communication and how to handle conflict, those times decrease and medical errors (operating on the wrong hip, leaving a sponge in) decrease, which we all know is huge. We can change all of those and, yes, they’ve been documented.

Carol: What’s your advice to the patient in this process?

Doctor Neha: That’s a good question. First of all, I would always bring someone with you. I find that in my office, people were the most afraid they’ve ever been because it was their own health or their loved one’s health. No matter what, go with somebody else. You need at least two people to hear what just happened, and ask questions.

The second thing I’d say is ask for a printout. “Can you please print out what you just told me about the x-ray, my lab results, etc.?” Always get it emailed or printed, depending on what you prefer. Don’t be bashful.

One of the big problems that I address with doctors is, please don’t say to somebody nothing’s wrong with you, because they would never have taken time off work or out of their day, and brought their loved one there if they…

Doctor Neha: …if nothing was wrong. I never heard somebody say, “My favorite place to go would be the doctor.” What I ask doctors to say is, “There’s good news and bad news. The good news is your heart’s doing really well. The EKG looks good. Let me explain to you your labs.” Then I say, “The bad news is you’re still having this discomfort in your chest.” What I teach doctors is [that they often] don’t address mental, emotional, social, sometimes spiritual events in people’s lives. And those problems end up showing physically in our bodies. So what you say is, “The bad news is you’re still having this discomfort. I’m wondering is there something else going on in your life that you haven’t addressed?Maybe having these palpitations is telling you something else is wrong.” These are the kinds of conversations we need. I’m trying to expand the thinking of the medical community.

Cory: Is it too late once a doctor is in practice and they’ve been at it for a long time to coach them up on how to ask these questions? How to think about the whole person as opposed to the bum knee or the weak ticker?

Doctor Neha: You know what? I’ll tell you, doctors by nature are just amazing. They really want to help their patients.I find that my colleagues really want to help people. So if they feel stuck and they’re not getting the results they want, they tend to be open to new ideas. Now, having said that, I will tell you that when I work with a group of 150 physicians, there are always five of them that say, “What are you talking about? This is how I learned it, and this is how it is.” But I’d say 145 of them say, “Wow, there’s something to this.” My job is to get them to see that there might be something they didn’t know they didn’t know.

Cory: I’m thinking of the Russian guy who worked on my shoulder when I dislocated it. This was the expert brought in. He didn’t want to hear the first thing about me.He was just going to tell me how he was going to fix my shoulder—and he did—but that was his approach.

Doctor Neha: Orthopedics and some surgeons are mechanics of the body and that’s what they want to do. They love their time in the operating room, and they want to solve your problem. I believe that the future of health care is really going to require an expansion of our thinking.

Carol: To start to get to the root of some of the problems, health care problems. Interesting, thank you so much. Doctor Neha Sangwan. She’s a physician, she’s the author of Talk RX: Five Steps To Honest Conversations That Create Connection, Health, and Happiness. She’s also Chief Executive Officer at Intuitive Intelligence.

How to Maximize Time With Your Doctor

To leaving your doctor’s office satisfied,