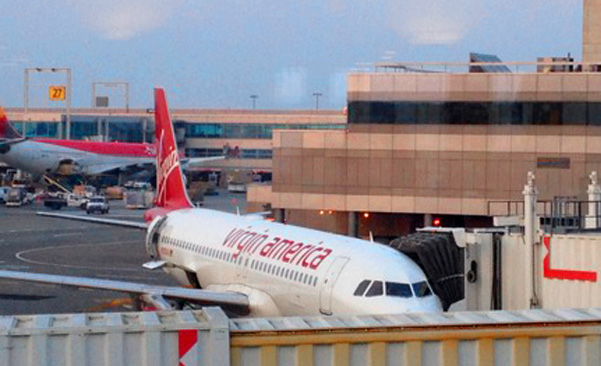 Two weeks out, you’d think I’d have noticed that it was strange to get a direct flight from JFK to San Francisco for $167. Instead, I remember thinking, Wow, it’s my lucky day.

At 5:45 a.m., Dad made me chai and then we drove to the airport with no traffic in sight.  We pulled up to Terminal 4. There were no lines.  It struck me as a little odd, but I had been away from home for three weeks and was looking forward to flying my favorite airline, Virgin America, so I didn’t pay attention.  Virgin America has comfy seats and serves real food, and most importantly I was just about to catch some zzz’s.  I walked right up to the counter to check my luggage, and the happy employees didn’t even hassle me for my 52-pound bag.  When does that happen?

As I approached security, I saw a handful of passengers waiting.  For once the economy line matched first class—both short.  I pulled out my boarding pass and saw that I was about to board Flight #11 on September 11th.  No wonder my ticket was so cheap!  They probably couldn’t give seats away today.  I felt sick to my stomach and my throat constricted.  It was a little late to be noticing now, I thought.  I took a deep breath and scooted my carry-ons forward in line.  Suddenly, I became aware of the somber atmosphere across the terminal.

To make things worse, it was time to go through security, the laborious process of disassembling and reassembling myself while I pretended today was like any other travel day.  At times like this, I have a practice where I challenge my mind to refocus on something positive.  Hey, at least I got dad’s homemade chai, the commute was easy, the flight was cheap and the line was short.  Not even two seconds later, a slew of flight attendants and crew filed in front of us.  Now the line wasn’t even so short.

And then, out of nowhere, a confident and lively voice emerged.  A TSA agent named Armando broke the silence.   And he wasn’t giving the normal spiel.

“Listen up everybody.  What’s gonna happen next, is that you’re going to push your luggage through this side of the belt into a black box, and then you’re gonna walk through to the other side. And you’re gonna go, ‘Wow! That looks like my bag!’ That’s because it is, people.  But I need you to keep on moving.  I know it’s pretty, but this is not the time to admire your bag.  Other people can’t get to theirs and it holds up the queue. So keep on movin’, people…keep on movin’…” 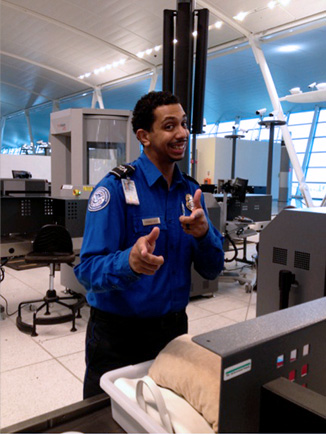 The woman in front of me turned around and looked at me as she raised her eyebrows.  We both smiled as Armando continued…

“I’m gonna say pre-emptively, liquids of more than 3.4 ounces aren’t gonna work.
“Now you can try it.” He paused.

“Then I’m going to lift your bag up and say, ‘Whose bag is this?  There’s liquid larger than 3.4 ounces in here.  How do you want to handle it?’  And you’re going to act all surprised.  And it’s just going to happen to be your favorite expensive shampoo…I know, I know, it makes you smell oh, so good.  I’m sorry—it’s the rules.  I didn’t make ‘em up.”

“Then, you’re gonna roll your eyes and be all mad at me and tell your friends how awful, unreasonable and overpaid those TSA people are.  You’re gonna say that we probably just wanted the fancy products for ourselves.  Now that isn’t true, people.  You know it.  Now listen, I’m just trying to keep the skies safe.  It’s my job.  And for those of you that still aren’t clear:  LIQUIDS ARE ANY SORT OF VISCOUS MATERIAL.  Are we clear?”

Now everyone in line was giggling out loud and unloading their laptops and drinking the last few drops in their water bottles with all eyes glued on Armando.  The passengers behind us were elbowing each other and enjoying the show.  And then something happened that NEVER happens in an airport security line (or in an elevator for that matter) —we actually began talking to each other.  We struck up conversation with the stranger next to us and began laughing as we helped one another through the line.

Except Armando wasn’t quite finished…

“C’mon people—this joking around used to work better in high school, but as a 28-year-old TSA attendant, I see it’s not working quite as well.”  He winked at us and then looked up at the ceiling in deep reflection as he exclaimed, “Ahhhhhh, oh high school… that was my time!  People really appreciated me back then.”

Then he made a fist, with his knuckles facing forward. And as each of us finished putting our bags on the belt, one at a time, he gave us a fist bump as he said, “C’mon now, lock it in.  Let’s lock it in for high school.  You remember.  Those were the good ol’ days. Thanks for doing your part to keep the skies safe.”

I gladly gave him a fist bump as I thanked him for taking pride in his job. 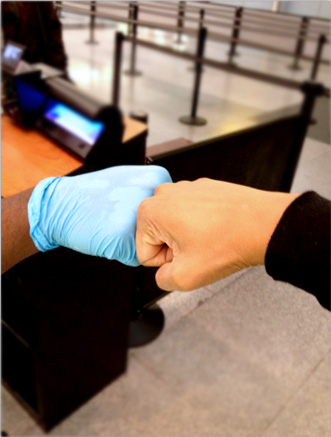 There was something magical about a TSA agent with the imagination and personality to transform security at JFK on 9/11 into a memorable, enjoyable experience.  Armando’s enthusiasm was infectious.  He got the job done.  He called out the obvious and got us to follow the rules.  He found a way to bring his authentic self to the process while making it fun for everyone else.  Just by his presence, Armando dissipated the angst, fear and tension I was feeling.  What a gift.

I asked Armando if I could take his picture, in case I turned this experience into a blog someday.  “Sure,” he said.  “Just let me know when you do, ‘cause it’s not often that we get thanked here at the TSA.  I really appreciate it.”  As I put my shoes and coat back on, I felt different.  I was much more at ease.  The energy of fear inside me had transformed into trust and surrender.  I couldn’t wait to get seated to capture what had just happened.

When you face a situation that challenges you, I wish you your very own Armando, a human reminder that if you change your attitude, you can change the world.

Comment below about something you normally dread that you can do differently. Share about the people you’ve encountered lately who have given you the gift of shifting your perspective.